Things I Buy for my Store

Sometimes I like to show you the things that I buy for use in my business. Last year I joined 'Knit it Now'. I enjoyed being a member & I did learn some things. I consider myself a fairly good MK now, but there are still many things I can learn. I always keep my antenna up for new ideas or projects.  & I am always on the lookout for things that can help me produce.  This is a cord knitter that I bought from 'Knit it Now'. (I won't say anything about the $$$.) 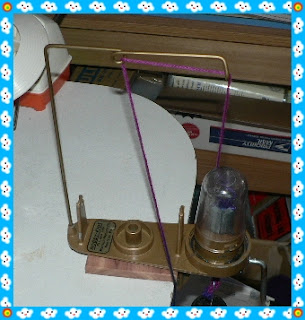 I use I cord for the ties in my diaper covers & I thought this would be a good addition to the tools that I use. I have always disliked knitting I cord on the machine. It was the one thing that I hated to do. This cord knitter is all metal & I understand it was made in the '40's. I tried to knit a worsted weight I cord with all 6 needles in, but that wouldn't work well. (Sue advises against worsted weight yarns.) Soooo, I took out 2 needles & tried again with 4 needles in. That worked beautifully. I use a little yarn spray with the machine & it doesn't have a problem with knitting the heavier yarns & makes great ties for my covers. I actually went back & bought another one for a lighter weight yarn & a 6 needles I cord, because changing needles with this machine is a hassle. I thought it better to just have a different machine for each weight of yarn.

If you decide to buy one of these, keep in mind that it requires 'Tender Loving Care'!! Never force the machine, keep it lubed & it will give you wonderful service. I have had mine for over a year now & it works like new. But, I have seen several on Ebay that are just the remnants of a working machine that has obviously been mistreated.  I have had several of the plastic versions & this one is so much better.

Posted by Sheryl Evans at 2:23 PM No comments:

Email ThisBlogThis!Share to TwitterShare to FacebookShare to Pinterest
Labels: diaper covers, I cord

I don't know how many of you get the "Knit Picks" catalog or follow 'Spilly Jane's' blog. I do both. Knit Picks yarn is mostly for hand knitters & spinners, but of course you may use their yarns on the bulky or mid-gauge machine. They have sport weight yarns that can be used on the standard gauge sometimes. You can find 'Spilly Jane's' blog in my favorites.

When I was looking through my Knit Picks catalog I was pleasantly surprised to see a couple of pages devoted to Spilly Jane's mittens. She knits the most beautiful mittens that she designs herself. She is a bit quirky & I love reading her blog as she thinks things that I never do & I find them very enlightening. Here is a picture of some of her mittens. So beautiful!! 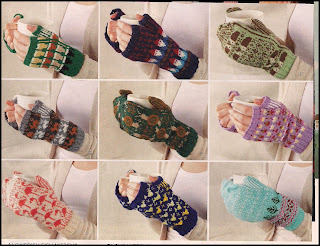 Have a look at her blog. I think you will like it.


Hope Valentines Day was all that you hoped for!!

Posted by Sheryl Evans at 10:54 PM No comments: