Hats are now finished & shipped to my friend. They are for her g'kids. I went to ravelry to get some info on size. Most were 14" x 9" so that is the size I made mine. It only took a couple of hours to knit each one up on the GC. I used some superwash DK wool that is nice & warm. The yarn is by King Cole & not available here in the US any more as the wholesale distributer no longer carries it although I did see it on Ebay a while back. I have maybe 20 cones left in my stash. I bought it to make sweaters for my son. He is outside a lot at work & needed some warm sweaters. 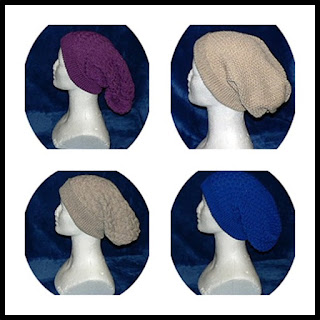 I had a lot  of fun making them & I hope that her g'kids like them. She said that they all have long hair including the boy & a couple of them are curly & bushy so they should work just fine.
While I was making the hats I had placed my GC Turn Around cams in the wrong place & they caused patterning problems at the end stitches. I went to the MK list & asked the members about the GC mis-patterning & received the info that the GC will mis-pattern if the cams are in the wrong place. I just hadn't use the GC for a while & forgot where the cams were supposed to be placed. Thought I would past that information on.

I'm busy making some slouchy hats for a friend. She has 2 high schoolers that want hats & also another one off to college. She wants them all one color, no stripes or fairisle but she did say I could add a little texture so am knitting them up on the GC. She wants one grey, one purple & one blue. I have some 100% Superwash DK Wool that is perfect for it. She said they all have long hair so they need to be roomy.  I might even try to sell one on eBay & see how that goes. 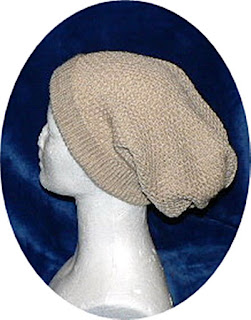