This is a set that I sold in my store. I have sooo many cute baby clothes. I miss making all of them & am trying to get some listed as I want to make them again. I love the baby clothes for using up partial cones. I still have my baby doll model. Now that we have a new baby in the family I have been knitting for him every chance I get.

When I look at some of the other knitting blogs they have lots of 'how too' video's & directions. I would like to be able to do that too but so far I haven't had the time. My store is picking up now that winter is coming & mom's are ordering longies for their little ones. I was hoping to sell some footies too, but nothing has come thru for any yet.

I have gotten a 'new to me' Garter Carriage. It is a rebuilt KG-88. I understand that this GC does not cast on, but that should be okay. Some time ago I bought a KH-860 Brother Clone punchcard longbed machine. It has 272 needles rather than just the 200 that the regular standard gauge machine has. I bought it so I could make bigger baby blankets for my store. I can also make smaller designs in a larger size that would take too many needles on a regular size machine. I found some extra rails on eBay & am going to cut them down to fit the machine. I have it set up in my knitting room but haven't knitted a thing on it & it has been sitting there for close to a year with the dust cover over it. I haven't used a punchcard machine in ages so will have to learn that first. The stand is very sturdy but I had to get a piece of plywood so I could get the machine on it. It took some doing but is ready to knit when I get the time. I have never used a GC on a punchcard machine either so that is also new for me.
Posted by Sheryl Evans at 9:10 AM No comments:

This is a GC sweater that I started for my g'son some time ago. I haven't a clue as to why it wound up as a UFO?? I really did intend to finish it before he out grew it, but that never happened. Now it will go into the charity box unless I can find some one else that it will fit. It is made from Piropo, a sport weight yarn, designed with the KnitWare program. It has drop shoulder sleeves & a cut & sew neck. All it needed when it was put aside was the neckband & to be sewn up. It didn't take long to do but somehow it was forgotten. I am going thru my UFO bin & taking all my UFO's out & am going to finish them before I start on anything else. I promise??!!

We have rain again. The summer sun has left us & it looks like cloudy days are in our future for quite a while. I will miss my mornings out on the deck. My dog gets cabin fever during the rainy season as she can't play outside when it raining. She asks to go out, then runs right back in when she sees the rain. She will play that game all day long if I go along with it.
Posted by Sheryl Evans at 10:53 AM No comments: 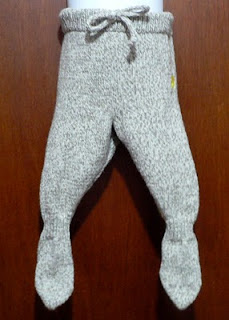 These are called footies. They are 100% wool & used as a diaper cover with feet. They are great for night time when the weather is cooler. When I make these, I knit the pants first, then flip them over & knit a sock on the bottom. The pattern is designed using KnitWare. They are very popular in the winters months for toddlers & babies. I'm hopeing that business will pick up as it doesn't seem the economy is rebounding even tho I read in the paper that is a fact??!!

Our summer weather is staying with us for a while. It is sooo nice to have the sun shinning & a warm breeze. I enjoy going out on my deck to drink my morning coffee when the weather cooperates!! For the sun to be shining in August is unusal for western WA.


Posted by Sheryl Evans at 5:59 PM No comments: