What Will Happen to the UFO's??

I have a BIG box of UFO's. I have decided that I am going to finish all of them before I start on any thing else. I have sweaters started that are now way to small for the intended person. I have a cardigan that I started 4!! years ago for my DS. I could go on & on but you get the idea.

I believe that MK should try to knit every day. However, I also believe that projects that have been started should be finished in the minimum amount of time. It isn't that I have a short attention span. It's just that beautiful cones of yarn call to me while I am trying to concentrate on the currant project. & when I go to bed at night it continues to call to me so that it is hard to stick to what's still on the machine. Most everything is knitted up & just needs neckbands & assembling. 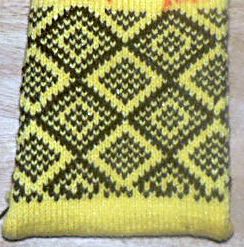 Here's a little swatch I knitted up from the Silver Reed patterns a while back. Eventually I am going to make my g'son a sweater from this. He picked it out himself & helped with the knitting. He is such a sweetheart & loves to wear the things that I make him.

I am on a number of MK lists although I don't devote a lot of my time to reading them. I just don't have the time to keep up with them. I did go have a look at the list the other day & one of the list members was complaining because her son, I think she said, told her that he 'did not want any of that homemade crap' this year. I thought that was a rather horribly cruel thing to say. We don't make the things we make to compete with all the manufactured goods out there. Sometimes when we make things they don't turn out to be all that we hoped they would. But we are in effect saying 'I care about you' & that should be acknowledged, not denigrated because it is a homemade gift.  Just my 2 cents.

I sensed the same feelings from relatives when I made Christmas gifts. Some people just don't understand that if you had it to give you would, but since you don't, you're trying to do the best you can. I hope people don't view the garments I've made to wear as that homemade crap!

What did people buy during the great depression? :)

I'm sure that everything that you made was beautiful. If they can't see that, it is their problem. I would much rather have a handmade gift that I know a lot of love & thought went into, just for me.

There were times when homemade was all there was. No one complained. They were glad to get it. As far as I am concerned, anyone that sticks their nose up at a handmade gift needs to learn some manners first of all & secondly, to have a little charity in their hearts. ;-)